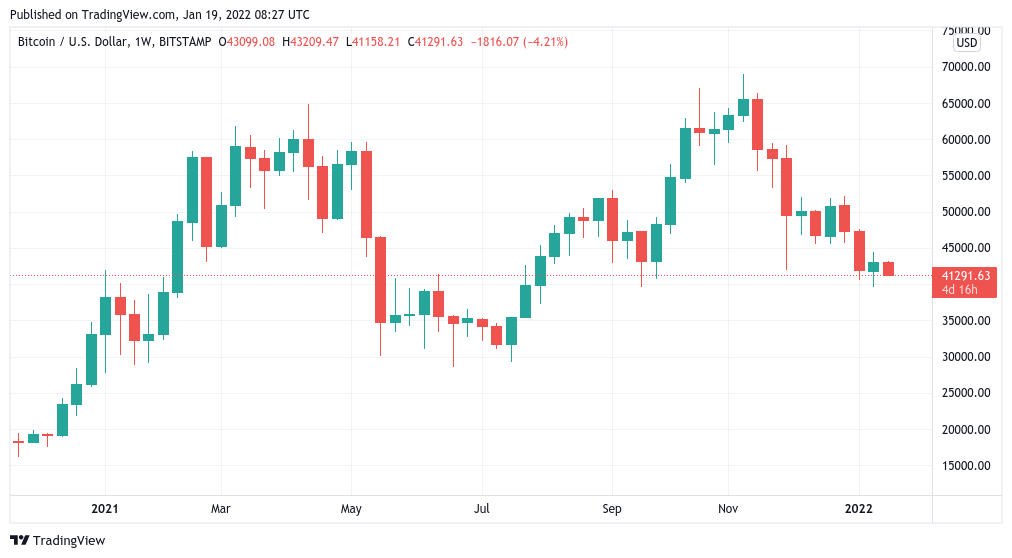 Bitcoin (BTC) will soon no longer be a risk asset, and investors should brace for a fresh price correction, says one of Bloomberg’s best-known analysts.

In an appearance on the Wolf Of All Streets podcast on Jan. 18, Mike McGlone, senior commodity strategist at Bloomberg Intelligence, sounded the alarm on global markets’ “up only” narrative.

As Bitcoin struggles in 2022, those hoping for a dramatic return to form will be disappointed by McGlone’s mid-term forecast.

The United States Federal Reserve, he said, will all but guarantee an end to the limitless gains for stocks — and crypto, naturally correlated, will suffer too.

“The number one theme I’ve been using for months now is ‘Do not fight the Fed,’” he began.

“If you’re long risk assets, you are fighting the Fed, and cryptos are the riskiest assets. The key thing, remember, is that Bitcoin is the least risky among cryptos.”

As the Fed attempts to rein in inflation and dramatically decrease asset purchases, the outlook is thus much less appealing for risk assets in the near term. For McGlone, however, there is a silver lining when it comes to Bitcoin’s inherent appeal.

“I think it’s transitioning from a risk-on to a risk-off asset,” he continued, adding that he “thinks Bitcoin will come out better off” after the period of policy upheaval.

“Here’s my prediction: The markets pull back finally, and we get a 10%–20% correction in the stock market. All correlations are one, which is usually the way it works. Bitcoin comes out better off for it.”

The Fed fights its balance sheet

Meanwhile, McGlone, who is famous for his bullish takes on Bitcoin in the past, is far from alone in his caution.

Related: Analysts warn that Bitcoin could dip to $38K ‘before an eventual breakout’

As Cointelegraph reported, even Bitcoin traders themselves are bracing for testing times ahead, while the analyst’s views were echoed earlier this month by Arthur Hayes, ex-CEO of derivatives trading platform BitMEX.

“The loose US monetary conditions definitely influenced the meteoric rise in price (albeit a few months delayed),” he wrote about the Fed’s balance sheet in a blog post on policy and Bitcoin.

“Since M2% growth stalled, Bitcoin has traded sideways. If M2 is set to hit 0% — and possibly even go negative — in short order, the natural conclusion is that Bitcoin (absent any asymptotic growth in the number of users or transactions processed via the network) is likely to go much lower as well.”

An accompanying chart underscored the implications of a much more conservative atmosphere.