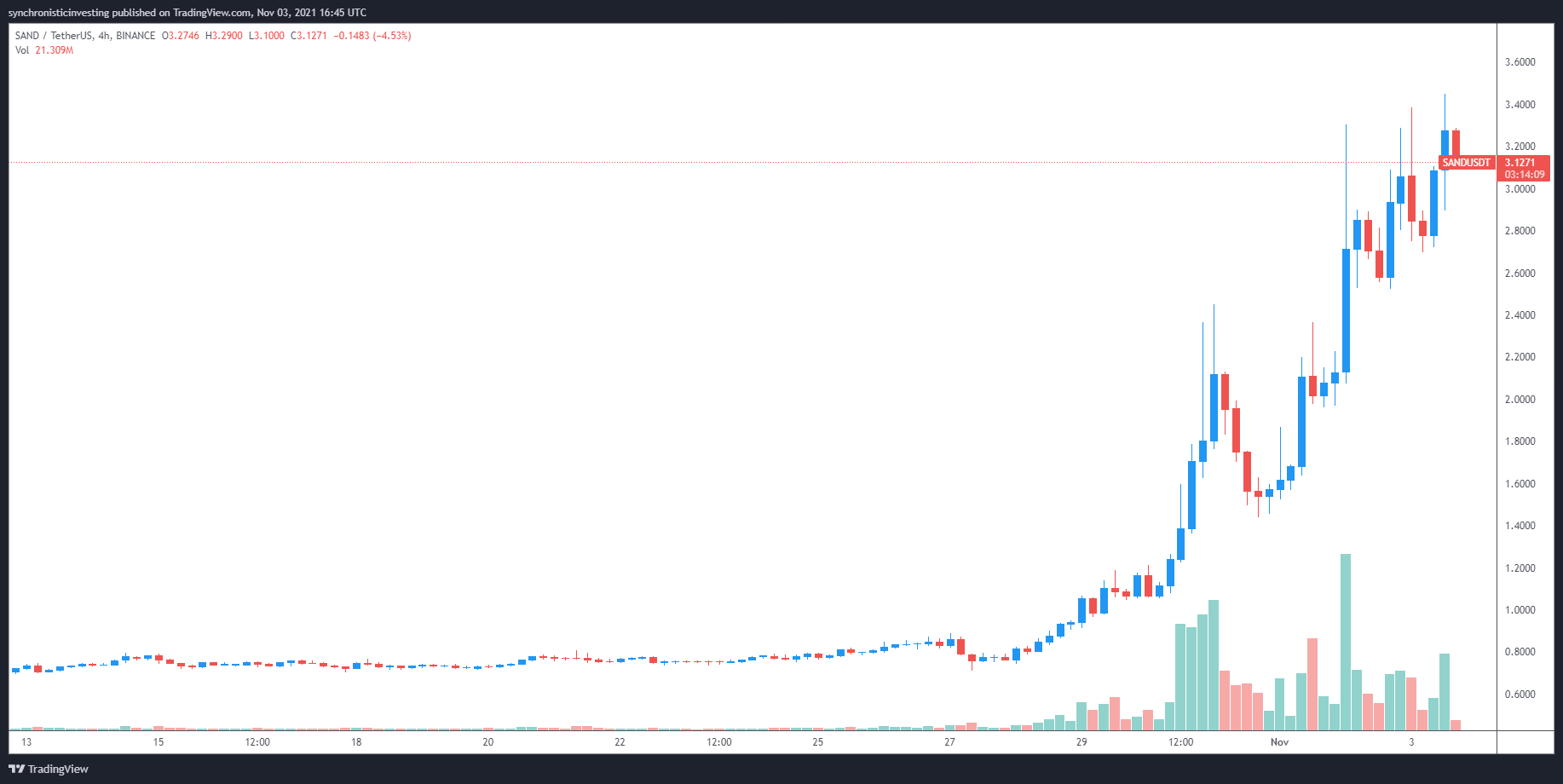 Everyone’s in The Sandbox: Artists, brands and creators pile into the Metaverse

The blockchain gaming ecosystem has seen explosive growth over the course of 2021 as nonfungible tokens (NFT) and the play-to-earn gaming model helped create new income opportunities for people around the world while also ushering in a new cohort of users to the cryptocurrency sector.

One project involved in gaming and the building of the Metaverse is The Sandbox (SAND), a blockchain-based virtual world where users to create, build, buy and sell digital assets in the form of a game.

Data from Cointelegraph Markets Pro and TradingView shows that after hitting a low of $0.70 on Oct. 27, the price of SAND has stormed 393% higher to reach a new all-time high at $3.45 on Nov. 3 as its 24-hour trading volume surged to $9 billion.

Three reasons for the sudden spike in price of SAND include the successful completion of a $93 million funding round, its expanding ecosystem that continues to onboard new partners and the project’s supportive environment that allows creators to engage with their communities while also receiving the lion’s share of revenue generated by their efforts.

SAND raises $93 million in a Series B funding round

On Nov. 2, The Sandbox announced that the project had successfully completed a $93 million Series B funding round which was led by the SoftBank Vision Fund 2.

According to the team behind SAND, the funds will be used to help scale the ecosystem’s growth strategy, operations and player acquisition “while sending a clear statement that the world’s most innovative fund believes in Web3 and decentralization as the next major trend.”

These plans include the addition of new games, live performances and social experiences that encourage community engagement and create a earning-friendly environment for creators, brands and intellectual properties.

A second factor behind the explosive price action for SAND is the protocols expanding network of big-name partners who have bought digital land inside The Sandbox.

Most recently, The Sandbox ecosystem welcomed Quan, a popular Japanese messenger and sticker characters collection. As part of its entrance to the ecosystem, Quan will auction off more than 300 LAND parcels, including 100 premium parcels that are bundled with NFTs.

The addition of popular companies to The Sandbox ecosystem should help to spread the reach of the community and attract new users to the world of blockchain gaming world.

Related: Microsoft muscles into the metaverse with Teams updates and Xbox upgrades

Another reason for the growth seen for The Sandbox is the attractive creator incentives offered to developers and artists who build within the ecosystem.

As a way to demonstrate the project’s focus on helping creators develop their brands, The Sandbox gives creatives 95% of the revenue generated by the items that they sell on the platform and 50% of all SAND revenue streams are reinvested into the Sandbox Foundation.

Funds in the foundation’s treasury, which adds up to more than $100 million, are used to provide grants to artists, creators and players.

VORTECS™ data from Cointelegraph Markets Pro began to detect a bullish outlook for SAND on Oct. 28, prior to the recent price rise.

As seen in the chart above, the VORTECS™ Score for SAND climbed into the green zone on Oct. 27 and reached a high of 74 on Oct. 28, around 32 hours before the price began to increase 229% over the next four days.